Skip to content
Roopkund (locally known as Mystery and Skeletons Lake)[1] is a high altitude glacial lake in the Uttarakhand state of India. It lies in the lap of Trishul massif and is famous for the hundreds of human skeletons found at the edge of the lake. The area is uninhabited, in the Himalayas at an altitude of 5,029 metres (16,499 feet).[1] Surrounded by rock-strewn glaciers and snow-clad mountains, the lake is a popular trekking destination.[2]
The roopkund lake in August 2014
A shallow lake, having a depth of about two metres, Roopkund has attracted attention because of the human skeletal remains that are visible at its bottom when the snow melts.[3] Researchers have concluded that the skeletons are the remains of people killed in a sudden, violent hailstorm in the 9th century.[4] Because of the human remains, the lake has been called Skeleton Lake in recent times.[5] 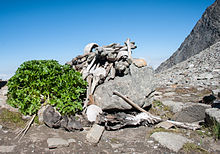 Human skeletons in Roopkund Lake
Skeletons were rediscovered in 1942 by a Nanda Devi game reserve ranger H K Madhwal, although there are reports about these bones from the late-19th century. At first, British authorities feared that the skeletons represented casualties of a hidden Japanese invasion force, but it was found that the skeletons were far too old to be Japanese soldiers.[4] The skeletons are visible in the clear water of the shallow lake during a one-month period when the ice melts.[1] Along with the skeletons, wooden artifacts, iron spearheads, leather slippers,[6] and rings were also found. When a team from National Geographic magazine retrieved about 30 skeletons, flesh was still attached to some of them.[1] Geneticists, Niraj Rai along with Manvendra Singh at the Center for Cellular and Molecular Biology at Hyderabad, conducted DNA tests on a hundred samples from the lake and compared them to the current Indian population. Results indicated that 70 percent of them had an affinity with Iran, while the remaining belonged to the local population. It is hypothesized that the Iran group took the help of local porters to seek new land for settlement.[1][7] Later studies placed the time of mass death around the 9th century CE (1,200 years old).[8] Local legend says that the King of Kanauj, Raja Jasdhaval, with his pregnant wife, Rani Balampa, their servants, a dance troupe and others went on a pilgrimage to Nanda Devi shrine, and the group faced a storm with large hailstones, from which the entire party perished near Roopkund Lake.[9][10] Remnants belonging to more than 300 people have been found. Radiocarbon dating of the bones at Oxford University’s Radiocarbon Accelerator Unit determined the time period to be 850 CE ±30 years.[citation needed] The Anthropological Survey of India conducted a study of the skeletons during the 1950s and some samples are displayed at the Anthropological Survey of India Museum, Dehradun   Source by :- https://en.wikipedia.org/wiki/Roopkund   As Roopkund lies within the region of District Chamoli, please keep with you at all times the following emergency contact details. Uttarakhand Helpline: 0135 – 2710334, 0135 – 2710335, 0135 – 2710233 Army Control Number: 0135 – 2716201, 0135 – 2710925, 0135 – 2716201, 0135 – 2710925 Army Medical Emergency numbers – 18001805558, 18004190282, 8009833388 Police: 100 Fire: 101 Ambulance: 102 Chamoli Control Room – 01372-251437, 251077, 09411352136 Flood Information – 01372-251437, 09411352136

By Bus Regular buses ply from ISBT Delhi Anand Vihar station to Kathgodam. Buses that go to Nainital stops at Haldwani. It takes a minimum of 7-8 hrs. to reach Haldwani. Only take the Buses which are run by Uttarakhand government.Read More ....